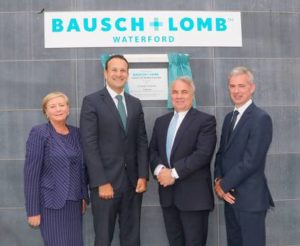 There were two welcome job announcements in the South East over the past couple of weeks.

Taoiseach Leo Varadkar and Tánaiste Frances Fitzgerald attended the opening of the €85m extension at the Bausch and Lomb facility in Waterford on Monday 31st July. A further 125 jobs were also confirmed, to go with the 175 announced for the new extension in 2015, bringing the company’s total employment to 1,300 in the South East. Mr Varadkar said the investment was a “big vote of confidence in this Government’s ambitions for Waterford and for the future”.

And in Enniscorthy, Co. Wexford, Irish IT services provider Datapac is to create 35 jobs as part of a new €2.1 million investment in the business. The company said the investment forms part of a plan to expand its network operations centre, which provides remote monitoring and management platforms. The job openings will be primarily in technical and business development roles to support Datapac’s expanded managed service offerings. Established in 1982, Datapac is one Ireland’s oldest ICT solutions and services providers. In addition to its Wexford facility, the company also has offices in Dublin and Belfast.