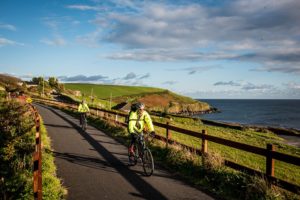 Headed up by Brian Galvin from Wexford County Council, the Greenway Project Office in New Ross will develop and implement a regional strategy designed to take advantage of opportunities from recreational tourism. An integrated regional strategy, aligning to national tourism initiatives, has greater potential for economic benefits and job creation and is more likely to be successful in securing funding.

The regional approach taken to developing a greenway strategy was praised at the recent implementation committee meeting. The South East APJ’s Industry Champion for Tourism, Liam Griffin, stated that the Greenway project for the South East was the most exciting tourism project he’d ever seen in the region, with the potential to deliver results across many areas of need, from job creation to rural development and connectivity.

The Director of the South East APJ, Sean McKeown, explained that completing the more than 230km of greenway projects in the region will still require around €32m in funding. Once complete, this would create a completely off-road connection that will span from Rosslare to West Waterford and northwards from Waterford to New Ross and St Mullins on a greenway/blueway route that will eventually link all the way to Dublin and west to the Shannon region. A route is also under construction from Carrick On Suir to Cahir in Tipperary and this could potentially link up with the Waterford route in time. It is estimated, based on figures from the already established Great Atlantic Greenway, that there could conservatively be a return on investment within five years given the level of increased foreign and domestic tourists and the job creation that would result.

Liam Griffin noted that the regional approach taken by the various agencies and councils should serve as a template for the further actions contained in the action plan and was a symbol of what could be achieved with such joined-up thinking by the local authorities.