The South East APJ submitted its first progress report covering the period from the launch of the Plan (in September 2015) to the end of September, 2016 to Minister Mitchell O’Connor recently. The report highlights the various actions undertaken by the wide range of stakeholders to date to stimulate economic development, enterprise and job creation in the region. 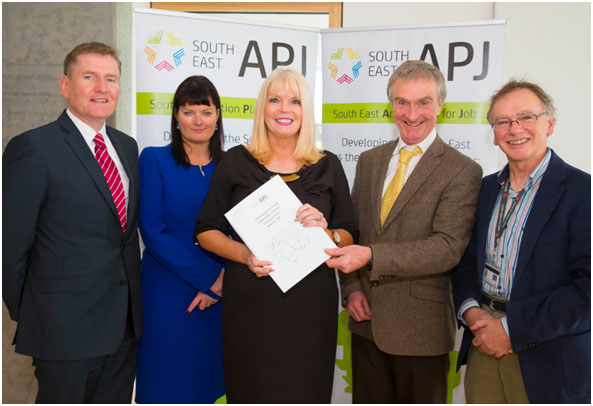 The positive employment trends in the south east region over the past 12-months are very encouraging. There is little doubt that the South East APJ is helping to make a difference. The Chairman of the South East APJ Implementation Committee, Frank O’Regan presented Minister Mitchell O’Connor with the Committee’s first progress report at the end of October, 2016. The Minister was attending the Implementation Committee meeting held in the WIT Arena, Waterford. The progress report confirms that all of the actions scheduled for delivery at this stage of the 3-year plan are either on track or have been completed. Frank O’Regan said:

“We have got off to a really good start with some early wins. We are united in our purpose to ensure the potential of the south east as a great place to live, invest and to do business is maximised and that we develop the right environment to create the jobs the region needs.”

Among the actions that have been progressed to date are: